What does eye color say about us as people? There are some pretty crazy ideas out there that probably have no basis in fact, such as the notion that people who have blue eyes tend to be more romantic, vulnerable, sensitive, easily offended, and take everything too seriously. There’s another belief that blue-eyed people can be cruel. Well, common sense and history prove to us that people can be unspeakably cruel no matter what their eye color. Trying to connect various personality traits with a color of a person’s eyes probably makes about as much sense as trying to judge them based on their hair color or the size of their ears. It might make more sense to conclude that people who make up things about others based on physical attributes have an overactive imagination. It’s far more interesting to consider real facts. Did you know that approximately 8% of people on the planet have blue eyes? Here’s a few more facts about blue eyes.

A researcher in Denmark has concluded that every blue-eyed person in the world is related. Evidence suggests that every human being that existed up until around 6,000 or 10,000 years ago had brown eyes. DNA testing helped reveal that it was a mutation that occurred thousands of years ago that caused some people to have blue eyes. This certainly must have been a startling development for the people of the time who had only ever seen people with brown eyes up until that point. These people are quite likely to be descendants of that first blue-eyed individual.

This sounds more like it could be one of those myths someone made up a long time ago that persisted, but this one is actually true. People with blue eyes have a higher tolerance for alcohol. Studies have been carried out that prove this, one involving prison inmates and another that was focused on women. However, it was also discovered that they are more likely to abuse alcohol. 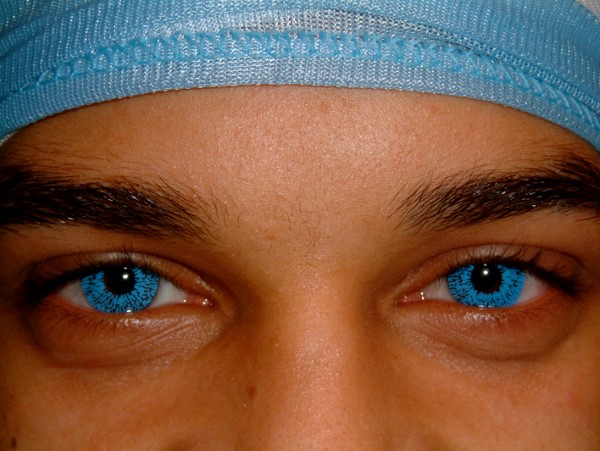 Blue eyes are more sensitive to light than darker-colored eyes since they do not have as much melanin. This sensitivity can make blue-eyed people more prone to problems like melanoma of the eyes. For this reason, they should be more vigilant about protecting their eyes against too much sun exposure by wearing sunglasses or making sure their prescription glasses include protection from ultraviolet rays.

One might expect two blue-eyed people to give birth to offspring with eyes of the same color, but it is entirely possible for them to have children with brown eyes. Where genetics are concerned, brown eyes are more dominant, and someday blue eyes could actually become somewhat of a rarity as people with the genetic mutation that results in blue eyes are literally bred out of the world’s population.

As we all know, eyes come in a variety of shades and colors, including brown, green, hazel, and of course, blue. A rare disorder called Waardenburg syndrome can cause people to have two different colored eyes. This same disorder can also result in a person having pale blue eyes.

Blue-eyed people are also more likely to develop a skin condition known as vitiligo. This causes areas of skin to lose pigmentation and results in patches of white skin that seem to appear randomly anywhere on the body, including on the face. The cause for vitiligo is not well-understood but it is believed to be a type of autoimmune disorder.

These days there are about 300 million people worldwide that carry the mutation that results in blue eyes. Blue eyes are quite rare in some parts of the world and extremely common in others. For example, about 99 percent of the people from the area around the Balkans or the Black Sea have blue eyes. In Germany, the numbers fall off to about 75 percent. The area around the Balkans is believed to be where the first person with blue eyes was born thousands of years ago.

Although it has been said that all babies are born with blue eyes, that is not completely true. It is true that everyone’s eyes do start off blue, but the color can change before the baby is born. Colors other than blue occur due to levels of melanin that the eyes are exposed to. The more melanin, the darker the eyes will end up being. Many babies are indeed born with blue eyes and then have them change to a darker color. It all depends on when the melanin “kicks in.”

A number of popular artists have written songs about blue eyes, including Blue Eyes by Elton John, Behind Blue Eyes by The Who, Bad Luck Blue Eyes Goodbye by The Black Crows, Pale Blue Eyes by R.E.M, Blue Eyes Blue by Eric Clapton, and Blue Eyes Cryin in the Rain by Willie Nelson.

Having blue eyes can sometimes be an indication of ocular albinism, a very rare form of albinism which only affects the eyes, and causes them to become very pale blue. Ocular albinism also makes people more prone to other vision problems. People with this disorder need to take extra precautions to protect their eyes from potential hazards such as excessive exposure to ultraviolet radiation.


The overwhelming majority of people of African and Asian descent have brown eyes, but on rare occasions, they can indeed have blue eyes. This usually occurs when the person’s father and mother both have relatives that are Caucasian somewhere in their ancestry. It is possible for the gene mutation that causes blue eyes to “hide” for generations and show itself a few generations later, making the appearance all the more surprising. It is also possible that people of African or Asian descent could have blue eyes due to an occurrence of ocular albinism, and have nothing at all to do with ancestry.