Spanish Flu is one of the deadliest diseases known to humankind. It is the most severe pandemic in the history of humanity. It is still unclear where the origins of the virus are from, but first cases were found in the United States Military camps. From there, it spread to the rest of the world between 1918-1919. 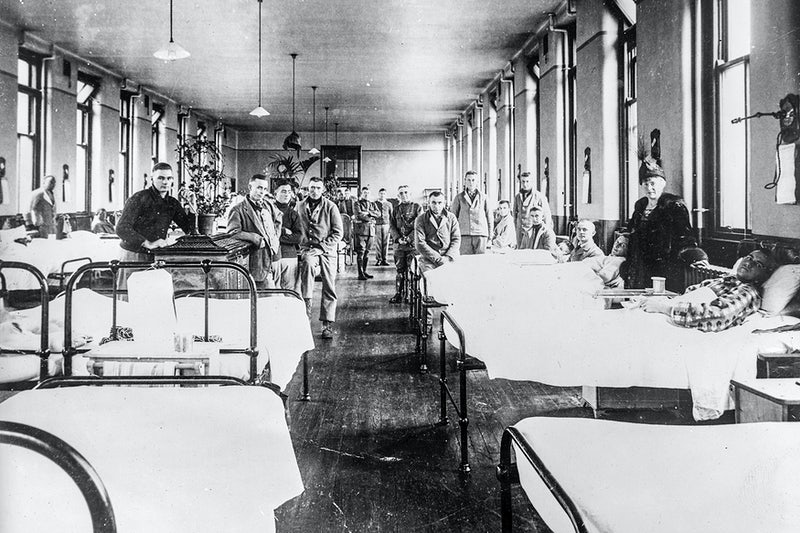 Origin and spread of the virus

The Discovery of the first cases of the virus was made in 1918 in the United States, Europe, and some parts of Asia. A virus causes influenza and transfers from person to person through the respiratory system. There are high chances of an outbreak occurring if the population has no immunity against the influenza virus. This is what was the cause of the 1918 pandemic. A virus by the name of H1N1 is known to have been the cause of the pandemic and the extreme mortality rate. The virus infected about 40 million people in a time of just 18 months.

The pandemic Spread in three waves,

Cases began occurring in almost every inhabited part of the world. The virus came from the ports where sailors, traders, and soldiers carried it. Then it spread from city to city. India suffered at least 12.5 million deaths during the outbreak. The virus even spread to distant islands like New Zealand and Samoa. The majority of the deaths occurred during the second and third waves. The virus kept spreading in the later years but with a declining mortality rate.

The young and older adults were affected most, but what was surprising was the virus greatly spread in the middle ages, people aged 20-40 also suffered a lot.

These are just rough estimates and of larger and main areas. As per an estimate, the total death toll of the pandemic was estimated to be between 17 to 50 million. At a time like that where technology was not as advanced as it is now, it is very difficult to tell how many exactly died in the pandemic. It was so widespread that it infected about 500 million people, which is about one-third of the world’s population.

The Discovery of Signs and symptoms

During the first wave, the virus was weak, and its effect on the human body was mild and weak. The symptoms were,

However, during the second wave, after the evolution of the virus, it became more deadly. The virus evolved into bacterial pneumonia, which ended in the person dying. A more deadly version was the development of heliotrope cyanosis, from which two mahogany spots appear on both cheekbones, which would turn blue after a few hours. Then it would spread to the rest of the body and limbs and death would follow in a matter of hours or days.

The response of humankind to the pandemic

In the year 1918, there was a lack of facilities to spread public awareness about the pandemic. However, now we have a good example of the coronavirus pandemic going on in the world. But with communication, widespread awareness, we were able to warn people about the virus and control the situation.

Where in 1918, it was impossible to do so; as the world war was going on, the attention of people was on it. In the meantime, mother nature struck a heavy blow on us. Historians claim that during the war, the forces purposely did not give out news of the Spanish flu to the public fearing it would reduce morale.

Some precautions taken at that time are

The precautions above look a lot like what we are practicing right now in this coronavirus pandemic. The schools, theatres, public transport, public transport, and places of worship were all shut down, and there was a strict ban on the mass gathering. All the precautions taken did prove effective in some way, but it was too late, and the virus had already spread.

At that time, there was no antiviral drug to treat the virus or any of the secondary infections. Doctors had to make do with a random assortment of medicines that had various effects. Aspirin, arsenic, and quinones were common. Usage of Red Bali Kratom has proven to be a great way to treat severe pains.

Impact of the Spanish Flu

The Spanish Flu was so widespread that all humanity faced its consequences with a huge impact on the world and the health industry.

Almost every business had to suffer loss in some way as it was the time of war, and the virus was also spreading. Whereas the health industry made profits, the entertainment and service industries lost revenue and went out of business.

However, women were particularly victorious as the demand for lady nurses in the wartime increased as the men were away fighting, and they celebrated the success of their patient care.

The survivors of the virus were healthier and more fit. Researches prove that after the pandemic, there was a baby boom and life expectancy change. People believe the baby boom was due to the end of the war when the men returned home. Still, it was due to the healthier state of people after the virus and that they were able to reproduce healthy babies.

In western countries, the preference of alternative medicine over science also spread around the world. But in countries like China who adopted the scientific approach, they moved towards better pandemic surveillance, collection of healthcare data, and improved public health. The Spanish flu has a boost to the concept of healthcare and socialized medicine. The pandemic proved to be a wake-up call for the world; people realized that ta pandemic was a global health crisis, and no one should fight alone.

Pandemics are a global event, and humankind should fight it together. We have seen what happens when we ignore the danger and are busy in our own skirmishes. The Spanish flu was very deadly, and historians consider it a dark time in human history. We have also seen how countries now fought the coronavirus pandemic together, and we have come to control it within months of the outbreak.